Tim Daost has been studying with us for some years. He has received both the De Laszlo Scholarship and was awarded Artist in Residence at Leighton House Museum. We have been fortunate that he has given a series of lectures at the studios on perspective and most recently on the American Illustrators. Here is a brief synopsis of his fascinating talk.

One of the main reasons I wanted to study traditional drawing and painting techniques was to improve my ability to tell stories visually.   I have always loved the way a good illustration can transport you to another world, and admire artists who can use realism in imaginative ways.

Although slightly less famous in the UK, the American Illustrator Norman Rockwell has long been considered a master of visual storytelling by the US public. 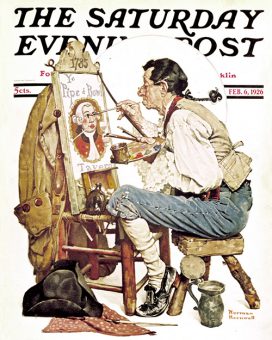 The more I practiced traditional figure drawing the more I wondered how Rockwell and his contemporaries became such amazing figurative artists and illustrators.  I decided to explore this topic more in a talk I gave at the studio in November 2016. 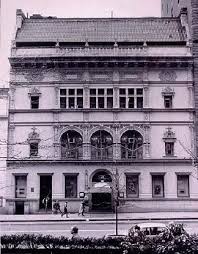 Researching a bit about the training at the Art Students League around the 1900s explains how its students became so influential.  At the time the League had three incredibly influential teachers:  George Bridgman, Robert Henri, and Frank Dumond.  All three of these teachers had trained at the Ecole Des Beaux-Arts or Academie Julian, some directly under the tutelage of France’s foremost academic artist, William-Adolphe Bouguereau.

Here are a few images of students training at the Art Students League – the setup should seem familiar to anyone who studies here at London Fine Art Studios. 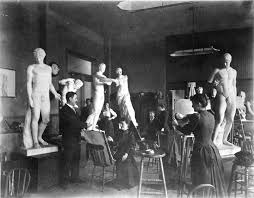 One of the longest standing teachers at the Art Students League, George Bridgman, wrote some of the most influential books on figure drawing that are still in wide use today and can be bought at the studio shop Lavender Hill Colours. Here you can see examples of the work from his class.

Robert Henri, another instructor at the League, wrote the highly influential book The Art Spirit. 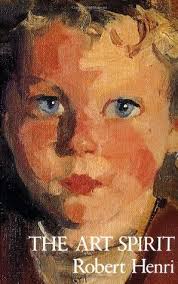 Frank Dumond, who exhibited at the Paris Salon and won a medal, can be seen in the photos above teaching cast drawing. 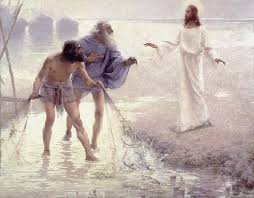 It is no surprise that instructors of this calibre were able to turn Norman Rockwell into one of America’s best illustrators by the time he was 20. Rockwell matured as an illustrator at a very fortuitous time, since the technical circumstances of the time made illustration the dominant form of advertisement.

During the 19th century lithography, photography, and printing were making it possible to mass produce black and white images cheaply.  Colour printing was a more complicated process, but by 1904 rotary offset lithography made it possible to mass produce colour images.  Although colour printing was possible, colour photography was still a challenging process until 1935 when Kodak introduced Kodachrome film.  This meant that mass produced colour advertisements required an illustrator from the early 1900s until about 1935.

This opportunity was taken up by many other Art Students League students:  Walter Biggs and Howard Pile were all former students at the forefront of American Illustration.

Illustrators from outside the League were also popular; a little research tends to reveal that they also had an academic background.  J.C Leyendecker was America’s leading illustrator before Rockwell.  He studied under John Vanderpool, the Dutch-American artist and author of the book “The Human Figure” which is still widely used in art schools today. Leyendecker continued his studies at Academie Julian in Paris.

Leyendecker’s images for Saturday Evening Post defined the modern look of Santa (often mis-attributed to a subsequent Coca-Cola campaign that clearly references these images), and his work for Arrow Shirts advertising helped define the fashion sense of the 1920s. 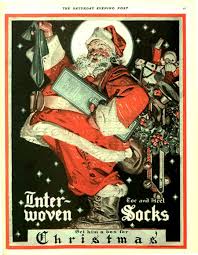 N.C Wyeth is also considered one of America’s greatest illustrators.  He trained under Howard Pyle, who was in turn trained by F.A Van der Wellen from the Antwerp Academy of the Arts.  It is hard to find exact details on how Pyle was trained, but it is clear the Van der Wellen had his students draw from casts.  Pyle also briefly trained at the Art Students League, and it is reasonable to surmise that Pyle trained Wyeth using the classical techniques that he learned from the league and Van der Wellen. 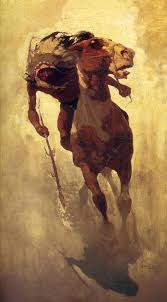 Wyeth completed an incredible 3,000 paintings (an average of 6 per month during his working career)  and illustrated 112 books (2 -3 per year)  during his career.  Maintaining such a pace would require spending no more than 25 – 35 hours per painting.