Skip to content
We are really excited about Felicia Forte coming to teach with us again this summer.
Last year, with the funds raised from her painting demonstration evening, Felicia very generously offered travel funds to two of the students who had attended her workshop and whom she believed would greatly benefit from time with her in Detroit.
We will be devising another exciting plan for a project with the funds raised by Felicia in conjunction with the Studios Next Generation Fund. The Next Generation Fund helps aspiring artists study at the studios and beyond.
___
Claudia Newcome writes about her experience in this blog:

In February 2019, after having finished my third course taught by Felicia Forte, I had the exceptional luck of being selected for a residency programme in her home town of Detroit.

I had gotten to know Felicia over her week long stays at London Fine Arts Studios, not a difficult task as she is immediately engaging and always eager to go out with students after a day’s teaching.

I had first signed on for one of her courses the previous February, having admired her work for some time, and found it to be one of the most constructive and rejuvenating classes I had ever taken.

She was generous with her demonstrations, working in a calm, measured way which still managed to have us all on the edge of our seats, answering any questions put her way and encouraging good natured dialogue.

We all flocked to buy the demos she had laid out, with people putting their bids in before she had even finished a painting.

When it came to teaching she was kind yet firm, encouraging everyone to come up with one thing they needed to work on, then honing in on that. I found myself and my work being pushed in a way it hadn’t in a long while, and after the initial horror at being put slightly outside of my comfort zone (which is painting painstakingly slow, colourless still lives on my own in a shed) I found myself thriving and producing work which felt fresh and bold.

I came away inspired and signed on to the next two courses.

Fortunately, Felicia must have seen some promise in my work as by August 2019 I found myself, along with fellow artist Georgie Vestey, on a plane to Detroit, Michigan to spend a little under two weeks painting with her.

Felicia and her boyfriend, Matt kindly picked us up at around one in the morning from the airport, frazzled after a 14 hour journey. They were kind and relaxed from the go, taking us back to their incredible time warp of a house, all 50’s décor, crazy colours, art, and eccentric paraphernalia.

We were set up in a large room off her studio, filled with her paintings, laid out with baskets of goodies and racks of hand selected records for us to play. Stayed up just long enough to toast our arrival and say hello to their overgrown puppy, Seven, before collapsing into bed. 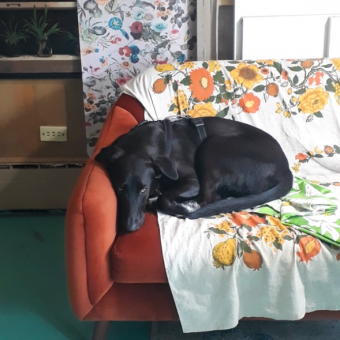 After a day spent settling in and exploring, we settled down to paint some interiors. Tricky to find a spot for this as every corner of the house felt inspiring, but we ended up painting a bathroom and a room off it, with me, sat on a loo painting a sink. This was a challenging start as neither Georgie or myself had much experience with interiors and I found myself getting hopelessly lost with my painting, but in a way, I think it was good diving in headfirst like that, certainly I got a few internal meltdowns out of the way!

The next day we went for something a bit simpler and did a still life. This went much better and I started to feel I was finding my feet. Georgie and I had laid out our painting aims and inspirations in an earlier email to Felicia, and having gone back over them, she began pushing us in the right direction. 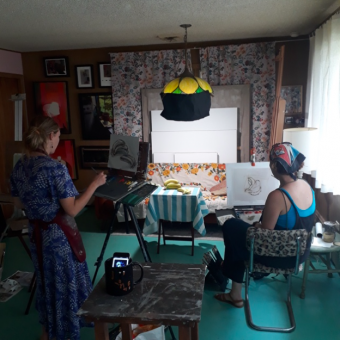 One of my goals had been to be bolder with colour which I was now regretting as Felicia was encouraging me to pump some life into my very subdued bananas. It felt good to be pushing my work though, and over our stay there we thrived on focusing less on a finished, safe result and more on trying out new techniques and experimenting.

For the next week or so we painted a crazy friend of Felicia’s, did a portrait and nude of a beautiful young model, attempted more still lives and gave an art lesson to a 15 year old girl. In the end, though, I think we all found we had the most fun painting each other. We did this towards the end of our stay and I think by then we had really got into the swing of it and developed a very easy rapport with one another. In this easy company, encouraging each other and pushing ourselves that last bit, I think we produced our best work.

I think we could have happily stayed painting for another month there, if not longer. It often feels in these situations like you’re leaving just as you’re really getting into it, but in fact, we had been producing good work and packing in so much from the beginning. The portraits of each other felt like a lovely way to end our stay, just the three of us working together, joking around, and for myself at least, feeling excited about painting again.

We left filled with ideas, already formulating plans for a joint showing of our work, with promises to keep in touch and keep the momentum going.

Now back in England, I’m putting those lessons into practice, feeling inspired and more confident, excited about trying out new ideas with my art.

And of course, I will be signing on to Felicia’s next course.

Can’t get too much of a good thing!