Our scholar Benj Randell gave a wonderful and insightful talk on Fantasy Art. 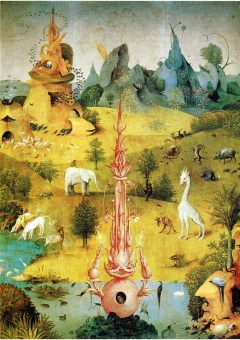 To summarise my talk: Fantasy art has evolved throughout history to take so many different paths that it would be a travesty to try and sum it up in one particular style of painting. Fantasy art influenced by literature including religious and mythical texts is still quite diverse but it is easier to track its evolution and the change in trends throughout history. From the religious works of Hieronymous Bosch and Gustave Doré to the paintings based of Arthurian legend and chivalry by J.W. Waterhouse and Edmund Blair Leighton and then the dramatic and vivid work of Frank Frazetta, all have attempted to present captivating and believable representations of the fantastical. At present a lot of modern fantasy art is a product of the influence of Tolkien and the pulp magazines, however, the genre is still broad and isn’t confined by a certain definition.

Most well known for his paintings of pirates.
Wrote and illustrated (woodblock prints) his own Arthurian stories. ‘The Story of King Arthur and His Knights’

Inexpensive fiction magazines that were published from around the early 1890s to the 1950s. Considered as low-brow.

Some fantasy pulp magazines include The Argosy and Weird Tales.

Widely considered to be the most influential and most emulated fantasy artist in history.
He defined the look of Conan the Barbarian.

Concept Art, and art form of creating ideas in order to create something more. Imagery for the space, the characters, the setting for video games, films and so much more.