During a sunny Saturday in July, I had the pleasure of watching a portrait painting demonstration at the National Army Museum in London, of Army veteran Pauline Milnes by tutor Michael Gallone.

This event was the second instalment of a series of collaborations between LFAS and The National Army Museum, to accompany the exhibition “Rise of the Lionesses” currently on show there. The exhibition marks the 70th anniversary of the Women’s Royal Army Corps and the impact women have made in the British Army.

Pauline Mills charmed and delighted the audience with her tales of her training days; from the many skills, she learned to the pranks she used to play on fellow Army members. Pauline also nearly joined the England Netball team but had to forfeit her place because of her army training
commitments. However, she did play for the Army Netball team and represented England when playing against other international Army teams.

It was also exciting to watch Michael’s portrait gradually take shape and to hear him talk and answer questions about his process. Here are some of the main points from his demo: 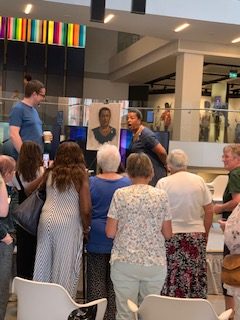 Light and Warmth
To achieve lovely and warm dark skin tones Michael used a mix of burnt sienna and raw umber to create the dark mid-tones. Pauline also had a warm light on her, so for her warmer mid-tones, Michael moved towards creating a more orange chroma as her skin got lighter.

As Pauline moved her head quite a lot to address the audience and the host during her talk, Michael used a combination of observation and memory to build the painting up. He would try to remember what her face looked like from a certain point of view – an idea of what she looked like, but would also utilise the moments when Pauline would move her head back in place to double-check the shapes he put down on the canvas.

Simplify and Unify
Even though Michael saw different colours in her skin, he tried to simplify them to give the portrait a more unified look. Michael also spent time trying to get a good colour match on his palette before he proceeded with getting the paint onto the canvas.

How Much Detail?
Michael would make sure not to overemphasise the details he saw and instead focused on getting the shape of her features correct in his painting. He would constantly ask himself “what would look nice in a painting &amp; what would make a beautiful painting?”

Composition
As the portrait was going to be displayed as part of a series in an exhibition and have a level of narrative as part of a set, Michael tried to position the head on the canvas in a similar place to Ann’s painting from her demo and placed his signature in the same style and position as hers.

Time
Aware of the time limit and having to work speedily, Michael spent the first session getting the underpainting down and used a lot of paint to block in the forms. He then spent the second session putting the details down.

Painting the Pins
For painting her jewellery and pins, Michael went for the overall shape first and tried to give the objects the right colours. He then tried to make sure they were casting shadows on Pauline’s jumper to give them weight and to look like they were sitting on her jumper. He would then use
sharp highlights for the metal. 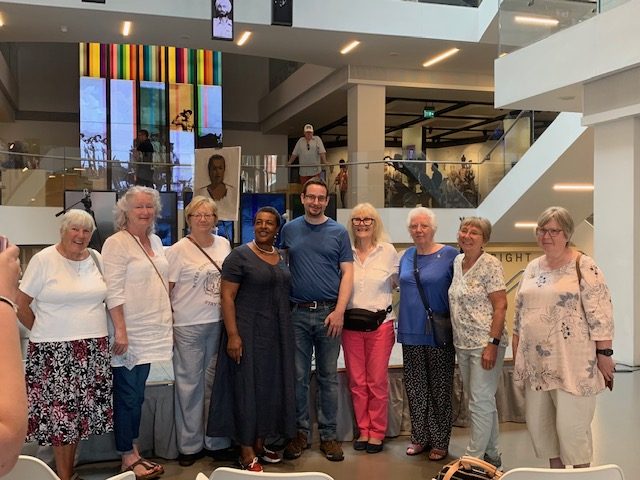 Rise of the Lionesses: 70 years of the Women’s Royal Army Corps is on show at The National Army Museum until 20th October 2019.

Check the LFAS ‘What’s On’ page for more painting demonstrations in the series. The collection of Women’s Royal Army Corp portraits will later be on show at the National Army Museum.

A wonderful #example of our #gesture & #anatomy #d