Last term, Dr Charles Whitehead gave a fascinating talk entitled ‘What is art for? – An anthropological view’. However, with enough material to fill a book, there simply was not enough time to cover everything. He has kindly agreed to carry on the discussion over the course of several blog posts, starting here.

Ann asked me to write a “short summary” of my talk. That’s a very hard thing to do because my talk was already too short – the things I covered were glossed over far too briefly and many things I wanted to talk about had to be left out. So I think I should just blog a series of topics, starting with one I did not talk about.

So take a look at the picture of the Makapangsgat pebble. This is a jasperite pebble with a striking red-brown colour, and it is a natural object – no one carved or drilled it to make it look like a human face. But it was found in a cave with Australopithecine bones, in deposits dated to three million years ago. And it must have been carried to the spot, because the nearest source of jasperite is five kilometres away. It seems some Australopithecine found it interesting enough to pick it up and carry it to the cave.

In Uganda, young chimpanzees – our closest relatives – have been filmed playing with sticks and stones as though they are babies, even making a nest at night to put the “baby” in. Captive apes love to play with dolls. So it seems likely that pretend play (make-believe or “imaginative play”) is at least seven million years old (when the last common ancestor of chimps and humans lived). If so, it would be no surprise if some Australopithecine child picked up a face-like stone to play with. I believe that the earliest iconic “art” – that is, something chosen or made to look like something real – would have been a child’s toy. You might say that more modern artworks are toys for grown ups.

Now look at the second picture. This shows one of two abalone shells used for making paint, accompanied by grindstones, all with traces of haematite or red ochre – found in Blombos cave, South Africa. The cave was evidently used as a workshop around 100 thousand years ago, and it seems red paint was being manufactured on a near-industrial scale – over 8,000 pieces of ochre were found, often polished smooth by rubbing or grinding, and some of them engraved with cross-hatched lines. Similar zigzag markings were made on a shell found in Indonesia dated to 430,000 years ago, presumably made by Homo erectus. Archaeologists argue about such things, but a reasonable consensus holds that the likeliest use for ochre would have been body-painting.

Body-painting is not usually iconic, and may represent what developmental psychologists call “mark-making” behaviour, as in the “scribble stage” in the development of child art. Or it could involve non-figurative patterns. Zigzag lines also represent pattern-making, which began in our ancestors almost half a million years ago, and perhaps earlier. Many animals seem to enjoy mark-making when given suitable materials. Animal paintings often have an apparent sense of pattern, though never quite so organised or geometric as those created by Homo erectus (and Neanderthals). Not just chimpanzees, but also monkeys, elephants, a beluga whale, naked mole rat, and even Bini the Bunny have produced paintings which are a kind of kinaesthetic play. Many zoos have now inaugurated “enrichment programmes”, including painting activity, to relieve boredom in captive animals.

Creating iconic images (representational art) and making patterns (“decorative” art) are two very different activities and may have evolved independently. Of the two, only pattern-making is necessarily aesthetic – that is, having colours, shapes, and composition that are intended to be visually pleasing in their own right. Mark-making probably also has aesthetic motivation, but this is hard to prove. Certainly, art critics have been fooled into writing rave reviews about animal paintings, believing them to be the work of talented human artists.

Philosophers and scientists who study aesthetics often define the aesthetic as any sensory or emotional response to art – even horror and revulsion. This risks obscuring the fact that there is a double dissociation between art and aesthetics – all that is aesthetic is not art (think of a beautiful sunset), and all that is art is not aesthetic (the art of Gobekli Tepe is intentionally nasty and repugnant – more on this later). A relatively new sub-discipline in brain science – neuroaesthetics – also tends to conflate “art” and “aesthetics”. This kind of thinking further collides with a popular biological opinion that aesthetic responses evolved to support adaptive choices – indentifying things that favour genetic fitness, such as the selection of ideal potential mates and locations that provide food, water, safety, shelter, and comfort. This biological view defines aesthetics in terms of attractiveness and beauty, and I prefer to stick with that more traditional view.

We can certainly argue for a very ancient origin for aesthetic sensibilities. When a peacock woos a peahen by displaying his gorgeous tail, it is hard to believe that the peahen is not emotionally moved by its beauty. The fact that we humans can also appreciate the beauty of those iridescent colours and multiple eye patterns – not to mention the stunning song-and-dance displays of birds of paradise – might even suggest that there is something universal about beauty. We can also appreciate the beauty of the bold wing patterns of certain butterflies. These patterns can serve such functions as camouflage and predator defence, but they also serve to attract choosey females. So even insects may have aesthetic responses.

Though chimps can read photographs and enjoy television shows, only humans are known to create iconic representations.

Neuroaesthetic research implicates very primitive brain regions in humans. For example, a study of people listening to their favourite music – the kind that gave them “chills” – found that these chills were linked to increased activity in the reward centres of the brain, just as the brain responds to food, sex, and drugs. These are part of the limbic system, the oldest part of the brain, which is similarly present in reptiles as well as mammals. There must be more to it than that of course, because we do not usually regard the pleasures of sex and eating as “aesthetic”. The reward centres do send signals to the prefrontal neocortex, where such distinctions might be made. The neocortex is the most recently evolved part of the brain, and the prefrontal lobe, which serves important social functions such as empathy and compassion, is the last region to become highly expanded during human evolution, and the last region to mature in young adults. Some of us would regard our aesthetic experiences as transcendent or spiritual, but most scientists regard such things as embarrassing and wrong. Neurotheologians study the neural correlates of spiritual experience, and not all of them are atheists. So far I am not aware of any collaboration between them and neuroaestheticians.

I think we can conclude that there are two distinct kinds of behaviour and response that can (but do not always) converge to form the foundations of what we regard as “art” today. Aesthetic responses, that can motivate mark-making behaviour and are certainly required for “decorative” pattern-making, seem to be extremely ancient and common to many animals.

Making iconic images, on the other hand, depends on pretend play, which has been observed only in our nearest ape relatives, and is uniquely elaborated in humans. Indeed, though chimps can read photographs and enjoy television shows (such as boxing matches and the movie King Kong) only humans are known to create iconic representations, and the earliest evidence for that ability may not be much older than 300 thousand years. The Berekhat Ram “Venus” is a scoria pebble which has been apparently engraved to enhance its resemblance to a female figure. Kill-joy archaeologists argue that the pebble is entirely natural, but there is no naturally occurring scoria anywhere near the place where it was found – a Homo erectus site on the Golan Heights in Israel. Microscopic examination has convinced others that the grooves around the neck and along the arms have been deliberately engraved. Similar arguments apply to the “Venus figurine” found near Tan Tan in Morocco.

One thing these objects are certainly not is Venus figurines, which are beautifully carved sculptures of the Upper Palaeolithic, widely distributed across Europe and Eurasia, starting around 200 thousand years later. I think it much more likely that they were dolls, made by or for children to play with.

So what does all this tell us about what art if for?

The earliest archaeological evidence points to two distinct kinds of behaviour. The first suggests kinaesthetic play – exploring the possibilities of bodily movement when artificially extended with engraving tools or paint, and the feelings that can be evoked by such action. This is one kind of embodied play and many animals are capable of enjoying it. The second suggests pretend play, or imaginative play using iconic toys that represent real things. During child development in modern humans, embodied play begins within an hour of birth, preceding pretend play which follows around a year later. And both these forms of play are part of the spontaneous repertoire of human infants, which enable them to grow themselves into healthy and socially constructive adults. Nor does play end with childhood, being essential to health and happiness throughout life. 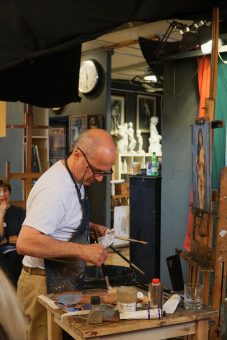 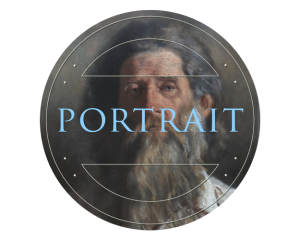 PORTRAITURE WORKSHOP Course Outline: After a brief review of the fundamentals, students learn to apply proportion and values to the portrait model, beginning in charcoal and progressing to oil painting using a limited colour palette.  All work is from [...]
10:00 am Portrait Sculpture @ London Fine Art Studios
Portrait Sculpture @ London Fine Art Studios
Nov 30 @ 10:00 am – Dec 1 @ 4:15 pm 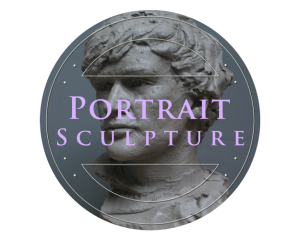 An #example of a plaster cast #drawing by #artist

An #example of a #stilllife #painting by @anna_dat